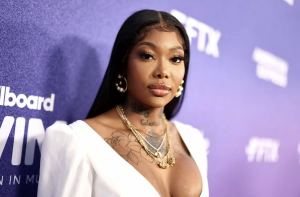 A day after announcing she was pregnant, Summer Walker, who was nominated in both the Best Female R& B/Pop Artist and BET Her categories walks the Red Carpet at the BET Awards leaving little to the imagination in a nearly nude ensemble, wearing a Laurel Street designed coin and crystal bra frame with her breast exposed only wearing gold pasties tp cover her nipples, a coin mini skirt, and black stiletto heels. In an Instagram post, Walker stated she was inspired by traditional Hmong jewelry. Hmong is a traditional jewelry originally created for The Hmong people in Vietnam who were enslaved and forced to wear necklaces for identification. After their independance, the xauv (necklace) was designed in remembrance of hardships. Now worn as an accessory when the community has celebrations. While Walker didn’t go home with any awards, Twitter had a lot to say about her look or lack of. She received mixed and not all were positive. The Asian community went in, saying she was disrespecting the culture and their traditions by sexualizing the jewelry of the Hmong people, indigenous people who mainly live in Southwest China, Vietnam, Laos, Thailand, and Myanmar. The comments on social ranged from “This is cultural appropriation.”While another posted “Wear it correctly and educate yourself & also your designer.”

Walker who has not responded to the criticisms as of date, has had a share of controversy with fans, which includes issues on how she was feeding her newborn daughter and even problems in her previous relationship. Over the weekend she announced that she was pregnant with baby number 2. saying “People asking me if I am pregnant,” The ‘Still Over It” singer says, before making a few funny faces and then admits “I am! And you know, I am very happy and excited about it.” She also stated that this pregnancy is going to be different “It’s just really peaceful.” and the only reason I’m only saying things as last time I felt very disrespected that people didn’t let me tell it myself.”  Walker was in a problematic relationship with ex-boyfriend London On Da Track who gave birth to their daughter, Princess Bubblegum in March 2021.

The post Summer Walker Bares All At This Years BET Awards Some Thought It Was “Disrespectful” appeared first on The Source.