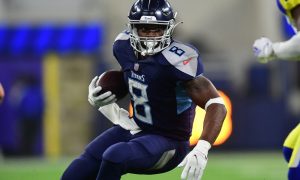 Its grand opening and grand closing for Adrian Peterson in Tennessee. The Tennessee Titians released Peterson after just three games on Monday.

Peterson rushed for 82 yards and one touchdown on 27 carries across three games in Tennessee. The future Hall of Famer stands fifth on the NFL’s all-time rushing list with 14,902 yards upon his release from the Titans.

Titans replaced Peterson by promoting Dontrell Hilliard to the active roster. Hilliard had seven carries for 35 yards and eight catches for 47 yards in Sunday’s loss to the Houston Texans.

“Speed, the runs he hit with a burst,” Titans coach Mike Vrabel said of Hilliard’s performance against the Texans. “He was able to function in there in a very uncomfortable setting of — all of a sudden — he is learning the third down, he is learning the two-minute and now the second half turns into a two-minute game. He handled that. He jumped in there and returned kicks for us, too. We will keep working with Dontrell.”

The Titans signed Peterson about three weeks ago to help replace Derrick Henry, who has been sidelined with broken foot since Week 9.

At 36, no telling if Peterson will catch on with another team. If not, he can rest assure, he had one of the best careers at the running back position.

The post SOURCE SPORTS: Titans Released Adrian Peterson After Just 3 Games With The Team appeared first on The Source.