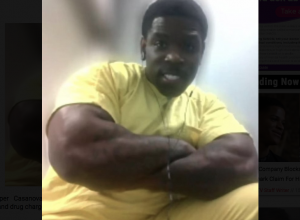 Incarcerated Brooklyn emcee Caswell “Casanova” Senior is sitting in a federal detention facility after pleading guilty to racketeering and drug distribution charges earlier this year. Now, a new photo of Casanova behind bars has surfaced online.

Cas seems to be in good spirits from the look of the image, draped in a yellow, federal prisoner’s uniform while giving a half-smile to the camera.

Senior is slated to be sentenced in December, where he could receive anywhere from five to sixty years in federal prison.

As previously reported, Casanova was arrested along with 17 other co-conspirators in 2020 on federal racketeering and drug charge after the Untouchable Gorilla Stone Nation fell to a RICO indictment, which involved firearms charges, narcotics, fraud and the murder of a 15-year-old male.