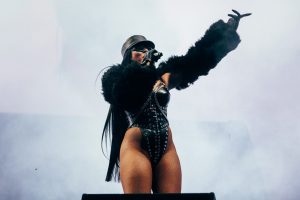 The 2022 Glastonbury Festival occurred over the weekend and featured performances from Kendrick Lamar and Megan Thee Stallion. Both stars took a moment to speak out against the Supreme Court overturning Roe V. Wade.

Thee Stallion would state her home state of Texas is embarrassing her and spoke on behalf of her fans. “I wanna have it on the records, that the hot boys and hot girls do not support this bullshit that y’all campaigning for.”

She would also start the chant, “My body, my motherfucking choice.”

During his time on stage, Kendrick Lamar said to the crowd, “They judge you, they judged Christ. Godspeed for women’s rights.”

The post Megan Thee Stallion and Kendrick Lamar Speak Against Overturning of Roe V. Wade at Glastonbury Festival appeared first on The Source.