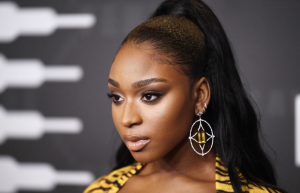 A cameo in Chris Brown’s newest video “We (We Embrace”)”  has created controversy among the 26-year-old ‘Wild SIde’ singer and her fans on whether she should be working with Chris Brown due to his abusive past.  In the music video which debuted on Tuesday, Normani and Chris show the two in a sensual dance and sharing a passionate underwater kiss while swimming fully clothed in a pool.  Fans were quick to criticize Normani for supporting 33-year-old Brown by agreeing to do the project with him, on Instagram describing working on the video as a “Surreal moment

thank you @chrisbrownofficial for trusting me. one for the fucking books.”  Although she received hi-praise from fans and her peers including Lala, and her former Fifth Harmony bandmate Dinah Jane.  But the majority of the comments were from fans who were not so supportive and bashed Normani for choosing to collaborate with Breezy.

Brown’s history continues to haunt him and probably always will. The singer has faced multiple accusations of violence against women. Brown’s ex-girlfriend, Karrueche Tran, requested a restraining order against the artist in 2017 and his attack against Rihanna in 2009 remains the most graphic accusation brought against the musician who pled guilty to assault and completed his probation in 2015.

The post Fans Blast Normani For Working With Chris Brown in New Music Video appeared first on The Source.