Cardi B Gets Wax Figure at Hollywood Wax Museum 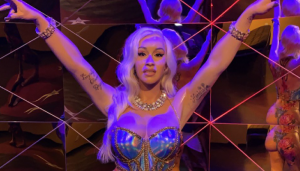 While many celebrities get called “plastic” by critics, Cardi B is now quite literally plastic as the Hollywood Wax Museum in Myrtle Beach, NC recently added a wax figure of Cardi B to their lineup.

The lifelike statue features a blonde Cardi complete with tattoos wearing a bedazzled two-piece costume similar to what she’s worn in her past performances, holding her arms up as if she is performing in front of an audience and pointing to them.

As for creating the wax Cardi? The Hollywood Wax Museum describes the process on their website, explaining how it take seven artists more than three months to replicate some of the world’s biggest stars, explaining the process as such:

“We start with a simple lump of clay, some measurements and a handful of photos. A clay sculptor then molds the clay into a remarkable likeness of the star, right down to every mole and wrinkle. Next, we start our work with wax. A mold is created using the clay head and face, and a molten mixture of natural and petroleum-based wax is poured inside to form a rough waxen image. We then begin to whittle down the wax to reveal appropriate wrinkles, fine lines and other unique markings of each forehead and face. The masterpiece is completed by adding the details of the eyes, ears, nose and lips. Then, it’s time to bring the wax to life. Appropriate color is applied to the skin and features and hair is inserted one strand at a time. Meanwhile, the wax artist creates hands that not only look anatomically correct, but will work just right with the figure’s stance and hand gestures.”

They then add a custom designed costume and props to complete the look.

As with all things, the internet is divided with some calling the statue realistic while others had their criticisms. As for Cardi? She appears to be here for it, sharing a photo to her Instagram story with the caption “Naaa this wax determine of me lit. I believed this was actually me ayoooooo.”

Cardi isn’t the first female hip-hop star to recently get a wax figure. In 2020, Madame Tussauds unveiled a wax figure of Nicki Minaj inspired by her Anaconda video.

The post Cardi B Gets Wax Figure at Hollywood Wax Museum appeared first on The Source.