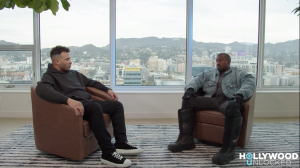 In a new interview with Hollywood Unlocked’s Jason Lee, Kanye spoke about how he felt disrespected after Kim Kardashian’s SNL hosting episode. However, the reason is deeper than you might think.

Ye says that he felt disrespected by Kim after she invited him to her SNL hosting gig and kissed her new boyfriend, Pete Davidson, right in front of him. However, the story does not end there. Kanye added that it wasn’t only Kim kissing Pete that bothered him, but the fact that he met with Ray J the night before to get a laptop from him that allegedly had a second sextape between he and Kim.

“How you gonna bring me to SNL and kiss the dude you’re dating right in front of me? And everybody’s like “Oh that’s cool.” After I went and got the laptop from Ray J myself that night” Ye said during the interview.

Ye added that he gave Kim the laptop and she cried. “I met this man at the airport. I got on the red eye, came back, and delivered it to her at 8 a.m. in the morning. And then I gave it to her and she cried when she saw it.” Kanye said that Kim cried because it represented how much she had been used and objectified. “It represents how much she’s been used. It represents how much people didn’t love her and they just saw her as a commodity.”

Before the clip, Ye mentioned how The Game’s manager Wack 100 had let him know about the second sextape. Ye and Wack 100 had been pictured together a couple weeks prior during Ye and The Game’s studio sessions.

In September of last year, Wack 100 went on The Bootleg Kev Podcast where he revealed that there was a second sextape between Ray J and Kim Kardashian. During the episode Wack 100 even says he wanted to give it to Kanye. Even though Kim’s lawyer would deny the existence of a second tape, it looks like Kanye is in possession of it.

You can watch the full interview between Ye and Jason Lee below.

The post [WATCH] Kanye Says He Met With Ray J To Get Laptop With Second Sextape With Kim Kardashian appeared first on The Source.