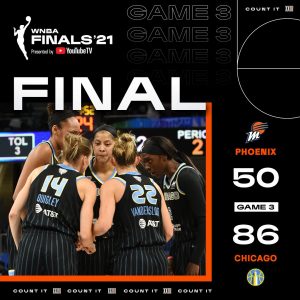 Kahleah Copper went off and couldn’t be stopped as the Chicago Sky now find themselves one win away from their first WNBA Championship.

Copper scored 20 points in an efficient first-half outing to lead the Sky to an 86-50 victory in Game 3 over the Phoenix Mercury at a sold-out Wintrust Arena in Chicago on Friday. It’s the largest margin of victory in WNBA Finals history at 36 points.

“I don’t focus on what we won by, it’s just how we played,” Chicago coach James Wade said. “We know we have to stay focused. I want them to feel good about tonight’s win, but after tonight we have to really hone in on the next game. We have to take care of business.”

Candace Parker had 13 points in 24 minutes with four rebounds and three assists. Courtney Vandersloot had another 10 assists this Finals. It’s her 10th career postseason game with double-digit assists, breaking the tie she held with Sue Bird for the record.

The Mercury are looking for their fourth WNBA championship but to get that they are aware that game 4 must be a better performance.

“We can’t be any worse than 50,” Phoenix guard Diana Taurasi said of the Mercury’s season-low in points, which is also the second-lowest total in a WNBA Finals game. “We’ll be better than 50. You can take that to Vegas.”

The Sky can close out the WNBA Finals on Sunday at 3 pm on ESPN.

The post SOURCE SPORTS: Kahleah Copper and Chicago Sky Dominated Phoenix Mercury To Pull One Win Away From First WNBA Championship appeared first on The Source.