Cardi B To Take Over the Breakfast Club? 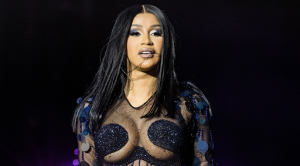 While she was a guest on Power 105’s Breakfast Club, host Angela Yee, DJ Envy, and Charlamagne the God asked Cardi B if asked if she would be interested in hosting the morning show as part of her rollout for her new album release.

The Bronx-bred rapper called into the Breakfast Club Thursday morning to give Angela Yee her best wishes as she prepares to embark on her new endeavor. Angela announced that she would leave the long-running morning show and host her final performance on Friday, December 2.

When  Charlamagne and Envy proposed the potential of Cardi hosting the show for a week, she enthusiastically replied, “Oh my God! I will tear that sh*t down!” Cardi B, who dropped her debut album Invasion of Privacy four years ago, has confirmed that her sophomore album is dropping in 2023. All 13 songs on Invasion of Privacy are certified Platinum, making Cardi the first female to achieve this feat. The accomplishment further extends the rapper’s initial record as the first female artist to have every track on an album RIAA certified Gold. Cardi B recently joined Irving and Jeffrey Azoff’s Full Stop Management, with Giant Music president, Shawn Holiday, playing an integral role in her making the jump.

When asked how she felt about her upcoming album, Cardi confessed, “I just feel like just missing something,” she revealed. She admitted that she thinks she’s too much in her head and feels like she’s not ready to release the album, but she has to. She yelled, “I just need to put it out!” Cardi, who has never shied away from being honest, said she feels better when her body looks right and told a shocked Charlamagne that she recently went to the Dominican Republic to get her body done to feel good.

Although Cardi did not specify when 2023 her new album will be dropping, we know her fans anxiously await the release. In the interim, fans can get their hands on Cardi’s final collection with Reebok, which she recently announced on her social media.

The post Cardi B To Take Over the Breakfast Club? appeared first on The Source.