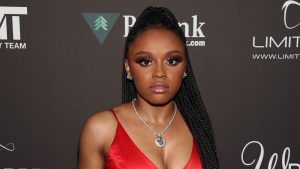 After giving birth to her firstborn child, Yaya Mayweather is embracing motherhood.

Before the birth of their son, the couple called it quits. Since then, Yaya seemed to be hung up over the rapper for a while. However, the boxing legend’s daughter took to her Instagram live to share that she’s the “happiest she’s ever been before.” Additionally, she admits that she “loves being a mother.”

In a recording of the Instagram live, Yaya looks visibly happy and radiant. While gushing about being a mother, Kentrall Jr. can be heard cooing in the background. “How’s Mom life? It’s amazing so good I love being a mother,” Yaya raved while answering a fan question.

Continuing on, she goes on to say “I’m honestly the happiest I’ve ever been like ever, it’s just amazing.” Pausing for a moment, she reads through comments on the live; choosing to ignore the negativity people projected in the live stream.

As she came to a close, Yaya tells her fans that she “just wanted to come on here and show you guys that your girl is happy.” The new mom has certainly come a long way. It would seem as though the days of posting emotionally charged, cryptic indirect subs towards her ex are coming to an end.

The post Yaya Mayweather Says She’s “The Happiest I’ve Ever Been” After Becoming a Mother appeared first on The Source.