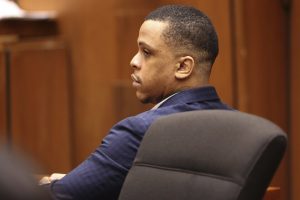 According to NBC Los Angeles, 35-year-old Bryannita Nicholson testified in court on Monday against Eric Holder in exchange for immunity. She maintained that she drove Holder home, not knowing he had just killed Nipsey Hussle.

Nicholson stated had been dating Eric Holder for a month prior to the murder of Nipsey, and that the two had met when she was driving for Lyft. On the day of the murder, Holder had asked Nicholson to take him to the Master Burger restaurant located on the corner of Crenshaw and Slauson, in the same shopping center as Nipsey’s Marathon Clothing Store.

Nicholson recalled that she saw Nip in front of the store, said “‘Ooh, there’s goes Nipsey, he fine,’” and told Holder that she wanted to take a picture with the Los Angeles MC and businessman.

Nicholson stated that Holder never told her that he knew Nip through their gang affiliation, and Holder had gotten out of the car and walked towards Nip while she looked for somewhere to park. By the time Nicholson parked the car and joined Holder, she admitted that his voice was raised. “Eric was asking Nipsey, ‘Did you tell somebody I snitched?’” Nicholson testified.

Nicholson was able to get a selfie with Nip after his brief encounter with Holder. “I was just excited, I was just happy, I just wanted to show my Facebook friends,” said Nicholson. She then went back to her car to post the picture on Facebook.

Holder then went inside the Master Burger, came out with chili fries, and told Nicholson to go around the block. At that point, he took out a semi-automatic handgun and loaded it.

“I was like, ‘What are you doing?’ You put that away, you ain’t going to shoot nothing outside my car,'” Nicholson testified. She added that “he did put it away.” Nicholson then pulled into the alley and waited for Holder. She said that she thought about getting a t-shirt from Nipsey’s store before she heard gunshots.

Nicholson said that she chose not to drive away after hearing the gunshots in case Holder was the one who had been shot. Holder then came powerwalking to the car and told her to drive. “I was like, ‘What happened?’” Nicholson said. “He said, ‘You talk too much I ought to slap you.’ And he was just like, ‘Drive! Drive!'”

It wasn’t until she got home and heard on the news that Nipsey had been fatally shot. People in the comments section of her Facebook post accused Holder of killing Nipsey.

Nicholson also testified that Holder refused to talk while she drove him to his home in Long Beach.

“Did it start to occur to you at that moment that Eric might have done it?” asked Deputy District Attorney John McKinney. Nicholson answered, “Yes,” and added that she agreed to pick him up but did not explain why she did.

The post Woman Recounts How She Unknowingly Became The Getaway Driver In The Murder Of Nipsey Hussle appeared first on The Source.