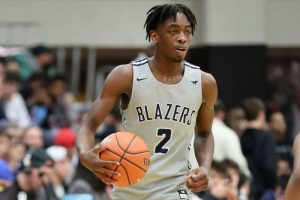 Zaire Wade, the son of NBA legend Dwyane Wade, is headed straight to the NBA system with a G League contract. According to Shams Charania of The Athletic, Wade plans to sign a contract with the G League’s Salt Lake City Stars. The Stars are affiliated with the Utah Jazz, the franchise his father is a part-owner of.

Wade is a 6’3″ shooting guard who had been considered a three-star recruit in the class of 2021. He had been heavily recruited by several schools including Nebraska, South Carolina, Rhode Island, and Toledo. Instead, he is opting to skip that route to try to break in with the Jazz.

Wade has also played alongside LeBron James’ son Bronny in high school and was seen training with NBA players over the summer, including Jazz guard and NBA Sixth Man of the Year Jordan Clarkson, All-Star Ben Simmons, and others.

Wade won’t be the only notable name playing G League ball after LiAngelo Ball reportedly signed a contract to enter the Oct. 23 draft on Monday.