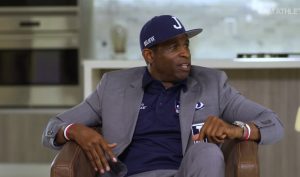 After his initial comments, Saban wanted to clear the air with Sanders, but he didn’t want any parts of it privately. Sanders is open to talking about everything public instead.

“I haven’t talked to Coach Saban. I’m sure he’s tried to call. We need to talk publicly — not privately. What you said was public. That doesn’t require a conversation. Let’s talk publicly and let everybody hear the conversation,” Sanders told Andscape on Thursday.

After Saban’s initial claim, Sanders first responded via Twitter with a clean and professional response.

Saban is looking crazy right now with his claims without proof. Alabama has been a dominant program, always attracting top recruits. NILs have leveled the playing field, and Saban has to adjust and not sound so bitter about it.

The post SOURCE SPORTS: Deion Sanders Wants No Parts Of a “Private” Conversation With Nick Saban appeared first on The Source.