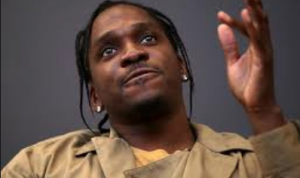 “Covered his own tracks, he didn’t care that,” Melber quoted. “We had a legacy he killed, I got to wear that/Every move we ever made is gettin’ stared at/I bet the man inside his mirror doesn’t stare back.” He added, “From great friends now it’s no affiliation/Divided by the time he was facing.”

Melber has utilized Hip Hop quotes from everyone from Jay-Z to Kevin Gates to explain some of the top political stories that came across his desk and Mr. Thorton took to social media to compliment Melber for including him among his insightful references.

Posting a video of the clip on IG, Pusha said, “I have to be the most quoted on @thebeatwithari . @arimelber do the numbers and let the people know…”