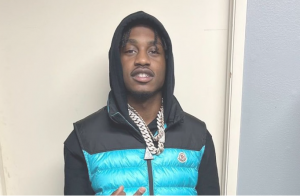 According to a recent report from TMZ, the alleged shooter who pulled the trigger shooting Bronx rapper Lil TJay several times, which landed him in the hospital to undergo emergency surgery, has now been apprehended and charged with attempted first degree murder.

Mohamed Konate has been charged with three counts of first degree attempted murder for his alleged involvement in the shooting that stemmed from an attempted armed robbery in Edgewater, New Jersey. TJay, whose given name is Tione Merritt, was shot multiple times and one of his acquaintances was shot once.

Both of TJay’s acquaintances were also arrested and charged with second degree unlawful possession of a weapon.

As originally reported, Lil TJay was shot several times Wednesday night in New Jersey and remains hospitalized following an emergency surgery to save the rapper’s life. The surgery was reportedly a success, as TJay appears to be doing better, however, the extent of his injuries are still unknown.

TheSource.com will update this story as details are still developing.