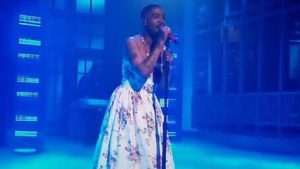 Just days after walking in Virgil Abloh’s farewell Louis Vuitton show, Kid Cudi took to social media to pen a touching tribute to his late friend, who passed away after a silent battle with cancer.

It’s taken me a few days to make this post. Tryna find the right words. Virgil was the kindest most warmest soul I’ve ever met. He was a true visionary, genius, disrupter, epic DJ and artist, but he was also just truly a beautiful human. I’ve never known anyone quite like him. And I know i never will. Once in a lifetime.

Virgil, I thank u for being a true friend and always makin me feel special when u sent a text, made time for me to hang or sent some shoes w my name on them. I love you endlessly. Til we meet again my friend. I hope u see what you’ve done. You changed the world forever. You did that. I love you Virgil. Goodbye my friend

Cudi posted a screenshot of the last text exchange they shared, saying he was “glad” he got to tell him how he felt about him.

“Our last text was Saturday morning. Im glad I got to tell u how I felt about u. Im happy u didnt leave here not knowing.

I love you Virg FOREVER”

The “Day ‘n’ Nite” rapper also shared a slew of touching photos of himself with Virgil, along with his final text message to the late designer.

Louis Vuitton announced his final menswear show, which took place Tuesday at the Miami Marine Stadium, to pay tribute to the “life and legacy of a creative genius.”