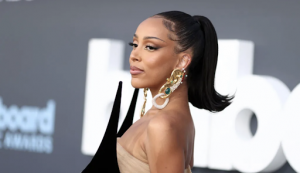 “I never liked having hair” Doja explained to her 24.1 million followers Thursday night after revealing a new buzz cut during an Instagram live. She was clearly having a transformative moment, mentally and physically and we were all here for it to listen and watch the ‘Kiss Me More’ singer let go of the very thing her fans never see, her natural hair she explains because she is constantly wearing wigs.   “What is the use of having hair if you’re not gonna wear it out, I don’t even sport it. ” Doja says as she talked about her decision to shave off her head. “I feel like I was never supposed to have hair anyway. I never liked having hair. I cannot tell you one time, since the beginning of my life, that I’ve ever been like, ‘This is cool.’ I just do not like to have hair,” she said. The Grammy winner also explained how she’s felt “so f***ing exhausted when working out” while wearing wigs on her head. Admitting to fans how her wigs would get tacky and start pealing off of her head due to moisture and sweat and how she couldn’t focus on the workout as she was more concerned with the way she looked and how her hair was doing. “First of all, I don’t wear my hair out. I don’t wear it natural cause I don’t feel like it. It’s just a f***ing nightmare, dude. I’m over it.” she goes on to say “ What is the use of having hair if you’re not going to wear it out I don’t even sport it.”

After debuting her new buzz cut, with a razor in hand Doja went in to also shave her eyebrows off making the decision to cut it live even revealing that her makeup artist was in a frenzy watching it and was driving over while she did it.  After she finished shaving one side she looked in the mirror and lets out a big oooooohhhhn and a smile.

It doesn’t look like the singer /rapper regrets one bit of her transformation, admitting to fans that she’s obsessed with her new look.  Sometimes you gotta let it go just to keep your sanity.  Thank you Doja for your honesty and for sharing your very personal transformation with us.

The post Doja Cat Reveals A New Buzz Cut And Shaves Her Eyebrows Off During Instagram Live appeared first on The Source.