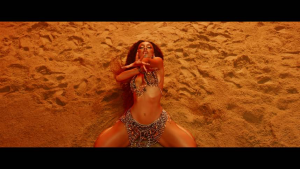 Doja Cat has released the steamy and stunning video for “Woman,” equipped with a cameo appearance by singer-songwriter Teyana Taylor.

“Woman” is featured on her GRAMMY-nominated album Planet Her which was released this summer. The video premiered on MTV Live, MTVU, and across MTV’s global network of channels, as well as BET Her and BET Soul; plus on the ViacomCBS Times Square billboard.

Doja Cat partnered with Girls Who Code to create DojaCode, an interactive music video experience for “Woman.” Inspiring a new generation of computer scientists, DojaCode invites fans to unlock exclusive content in Doja Cat’s newest video — all by using code. The interactive experience was dreamt up in partnership with Mojo Supermarket and built by Active Theory.

You can see the full video below.