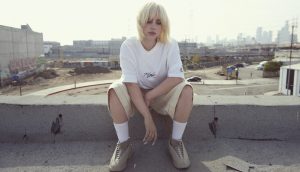 Kanye West and Billie Eilish may not see eye-to-eye on much, but one thing they have in common (aside from being chart-topping artists) is the fact that they now both have their own sneaker line.

While Ye has been in the sneaker game for quite some time with his Yeezy line, Eilish only recently entered the game with her neon green Air Jordan KO and most recently, with the debut of her Air Force 1 High last month. Now it appears that a Billie Eilish x Nike Air Force 1 Low is about to drop as well.

Eilish, who is one of the rare female artists with her own sneaker collection, has definitely imprinted her style in the Air Force 1 High, an oversized chunky style featuring five mid-foot straps over the laces. The entire upper (including the Nike swoosh) is a beige-ish colorway that she simply calls “mushroom.” (The sneaker is largely made with eco-friendly and recycled materials.)

A first glance at the Low model shows a departure from the monochromatic style of the High with two slightly different colorways on the upper in a block-like pattern overlaid by the Nike swoosh. Instagram account @solebyjc shared a sneak peek of the latest drop, which as of yet, has no release date.

The post Billie Eilish Steps up Her Sneaker Game with new Air Force 1 Release appeared first on The Source.