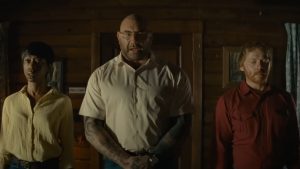 The first trailer is being released for M. Night Shyamalan’s new film Knock at the Cabin.

The film follows a young girl (played by Kristen Cui) and her parents taken hostage by four armed strangers while on a vacation at a remote cabin.  The strangers tell the family they’ve been sent to stop the end of the world and the family must make a difficult choice to avoid the apocalypse.  The movie stars Dave Bautista, Jonathan Groff, and Rupert Grint.

Knock at the Cabin releases in theaters on February 3rd.

The post WATCH: First Look Trailer Released For M. Night Shyamalan’s ‘Knock at the Cabin’ appeared first on The Source.