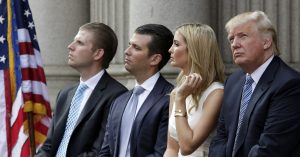 The New York Attorney General announced a civil lawsuit against former President Trump. Including, the Trump Organization and three of his adult children for alleged widespread fraud involving false financial statements related to his company and inflating his net worth.

NY AG Letitia James says this is the result of a three-year investigation, alleging Trump and his family falsified business records, stretched asset valuations, and committed bank and insurance fraud.

“Mr. Trump’s Statements of Financial Condition for the period 2011 through 2021 were fraudulent and misleading in both their composition and presentation,” according to filed documents.

“Trump falsely inflated his net worth by billions of dollars.” James said at a news conference. “Mar-a-Lago generated less than $25 million in annual revenue. It should have been valued at about $75 million, but it was valued at $739 million.”

Speaking to reporters, James said “Nobody is above the law.”  She added what Trump allegedly did wasn’t a mistake made in good faith.

The AG explained that even if Trump moves to Florida, he’ll still have to answer the allegations made against him by New York authorities.

The lawsuit seeks a $250 million judgment that would also ban any member of the Trump family from leading a business in New York State.

During a deposition last month, the former President pleaded the Fifth Amendment.

Trump’s lawyers say the lawsuit is merely a way for James to advance her political agenda.  They also accuse her of an “abuse of authority,” “racism,” and add they’re looking forward to defending Trump.

What’s your thoughts on Trump’s civil lawsuit? Continue the conversation on social media.