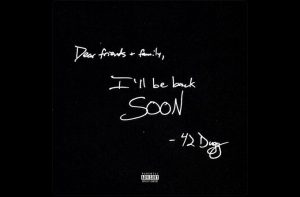 “Soon (feat. Arabian)” is the new single by 42 Dugg. The reflective track follows the CMG signee’s collaboration with EST Gee, Last Ones Left, which was released in early April. Dugg set a new career-high as the album debuted at No. 7 on the Billboard 200 charts.

The Detroit native’s latest album arrives only one day after his record company, CMG, was named “The Hardest-Working Label in Hip-Hop” on the cover of Billboard. Despite the fact that Dugg was unable to attend the cover shoot, the Billboard cover featured Yo Gotti, the CEO of CMG, as well as labelmates Moneybagg Yo, EST Gee, Mozzy, Blac Youngsta, and Lehla Samia.

The new single may be heard below.