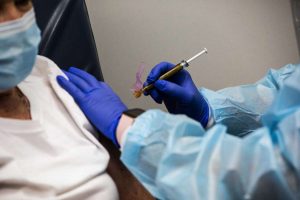 Monkeypox virus cases are on the rise across the country.

The Biden administration is declaring the monkeypox outbreak a public health emergency in the U.S.  White House COVID Response Coordinator Dr. Ashish Jha, who is also helping on this front, says the decision gives the government more readily available options to fight the infectious disease. The first confirmed case of monkeypox virus in the U.S. came on May 18.

During a briefing Thursday, White House Press Secretary Karine Jean-Pierre confirmed that the virus is spreading rapidly.  She insisted the administration is working aggressively to end the outbreak as soon as possible, including the rapid dispersal of monkeypox vaccines.

The virus has been spreading primarily through direct physical contact.  More than 6,600 cases have been considered probable or confirmed since monkeypox was first found in the U.S.  New York is the epicenter of America’s monkeypox outbreak with the CDC saying New York has more than 1600 cases or nearly one in four of all U.S. cases. While cases have been detected in every state except Montana and Wyoming.

Share your comments and thoughts with us on social media.

The post U.S. Declares State Of Emergency Amid Monkeypox Virus Outbreak appeared first on The Source.