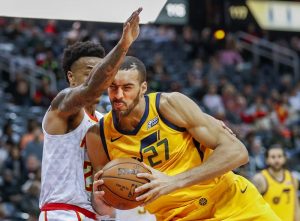 Utah Jazz center Rudy Gobert can officially claim the title of the best player in the NBA. The big man was named the NBA’s Defensive Player of the Year Wednesday night.

Gobert is now the fourth player to win the award three times in his career. This year, he finished with 84 of 100 first-place votes. The other 15 went to Philadelphia 76ers guard Ben Simmons, bringing him in second. Draymond Green of the Golden State Warriors was third.

“It’s unbelievable,” Gobert. “When I started basketball as I kid, if somebody would have told me that I was going to be defensive player of the year, I would have never believed them, let alone three times.

“It’s hard to put into words the things that you can achieve when you just enjoy what you do, first of all, and when you have a group of people that believes in you and you put the work in every single day. I try to write my own story, try to enjoy my own journey, but just being one of only four guys that have won the award that many times, it’s just amazing.”

Gobert and the Jazz will take the court again on Thursday as they attempt to put the Utah Jazz into a 2-0 hole.