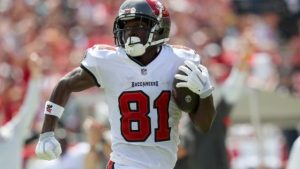 The Tampa Bay Buccaneers will be without Antonio Brown for the next three games. Brown has been suspended by the league for violating the NFL-NFLPA COVID-19 protocols, the league announced Thursday.

Brown’s attorney, Sean Burstyn, said in a statement that Brown “continues to support the vaccine for any person for whom it is appropriate.”

“The NFL made its determination and, instead of going through the drawn out and distracting process of challenging the outcome, Mr. Brown wrapped this up promptly and he will make the most of this time by treating his ankle injury,” Burstyn said. “Mr. Brown will be motivated, well rested, and in the best shape of his life when he returns in week 16.”

Ironically, Brown might not have gotten caught if he didn’t still his chef out of $10,000 dollars. The chef told a reporter in Tampa that the vaccine card Brown presented to the Buccaneers was very likely fake, triggering an investigation.