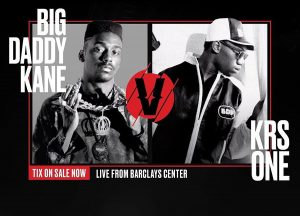 New York City will once again be the location for VERZUZ. Big Daddy Kane and KRS-One are set to take over the Barclays Center. After the announcement was made official, fans began to go into the discographies of both artists and attempt to pick a winner.

Brooklynite Antonio Hardy aka Big Daddy Kane stepped on the scene with the Juice Crew in the late ’80s and has been rocking the mic and setting cultural trends ever since. Big Daddy Kane was the first Hip Hop artist to sell out the Apollo Theatre not once but twice with his women-only show. His career has solidified him in hip-hop history putting out hits such as “Ain’t No Half Steppin”, “I Get The Job Done”, and “Smooth Operator.”

KRS-One solo career began 28 years ago with the release of Return Of The Boom Bap recorded almost totally in the legendary D&D Studios. With production from DJ Premier, Kid Capri, and Showbiz of Showbiz & A.G. while being promoted and marketed by Jive Records, this album is one of Hip Hop’s buried treasures and received 4 mics from The Source Magazine.

Prior to the solo release, KRS-One was an integral member of Boogie Down Productions, teaming with DJ Scott La Rock and Derrick “D-Nice” Jones. After rocking with the crew for five albums, KRS-One would follow his Return of the Booom Bap album with a self-titled release, I Got Next, and an onslaught of albums that run on to today with his Between the Protests album dropping late last year.

With the stage for the VERZUZ set, The Source gives a taste of what will come from Barclays Sunday night. Check out five selections from both KRS-One and Big Daddy Kane then let us know who gets the win when Sunday rolls around.

The post SOURCE PREVIEW: Big Daddy Kane vs. KRS-One Who Wins the VERZUZ? appeared first on The Source.