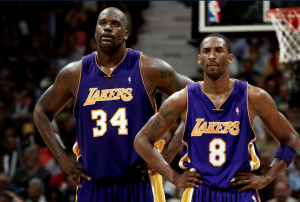 Shaquille O’Neal and Kobe Bryant-led Los Angeles Lakers were one of the great dynasties in the NBA. While the dynamic duo only won three championships together, both always stated they really should’ve won more together.

O’Neal appeared this week on Showtime’s “All The Smoke” podcast. During the episode, the Hall of Fame center was asked how many more rings he could have won with Bryant had they stayed together in Los Angeles.

“Seven,” O’Neal replied. “The reason why I got traded, it wasn’t about me and Kobe beef. It was that they wanted me to take less money. I’m not doing that. I got money, I had money. I just should’ve been like, ‘Alright, I raised you enough. It’s your team now.’ I know what I’m gonna do. I’m still gonna do my 28 [points] and ten [rebounds].

“But I was like, “Nah, I want 150 [million dollars],” added O’Neal. “If I had to do it all over again, I probably would have had a meeting with the [Buss] family. ‘What y’all wanna do? Want me to take less money, take a lesser role, and stay here? Or you still want me to be Shaq?’ See, it’s that ego. The ego still got me what I wanted. I still went to Miami. Pat [Riley] took care of me, and I still won one. But I would’ve liked to stay there the rest of my career.”

While O’Neal went on to win another chip in Miami, Bryant won two more in LA. If the two stated together and worked out any indifference behind the scenes, who knows just how dominant the Lakers could’ve been under their watch.

The post Shaquille O’Neal Tells All The Smoke Podcast That He And Kobe Bryant Could’ve Won A lot More Rings If Stayed Together appeared first on The Source.