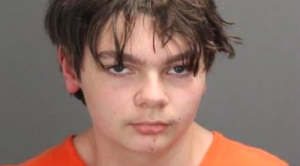 The parents of the Michigan school shooting suspect are being charged with manslaughter.

The teenage gunman was identified as 15-year-old Ethan Crumbley, who has been charged as an adult with 4 counts of first-degree murder, 7 counts of assault with intent to murder, 12 counts of possession of a firearm in the commission of a felony, and 1 count of terrorism causing death.

The accused teen is facing charges as an adult for the Tuesday killing of four students and injuring seven other individuals at Oxford High, north of Detroit.

Investigators are still trying to determine his motive for the shooting.

“The person that’s got the most insight and the motive is not talking,” Oakland County Sheriff Michael Bouchard said.

The Oxford High School students killed were Tate Myre, 16; Hana St. Juliana, 14, and Madisyn Baldwin, 17. A fourth student, 17-year-old Justin Shilling, died Wednesday in the hospital from wounds he suffered from the shooting.

All schools in the district will be closed for the rest of the week.