On The Rise: Buffalo’s Che Noir Is Taking Control of Her Own Story 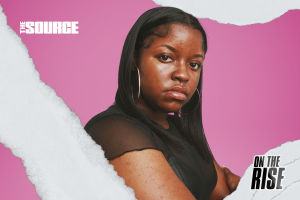 Che Noir is her own author. Characterized by the grit that colored her upbringing in upstate New York, the 27-year-old took control of her narrative from the outset. With aspirations in Hip-Hop, this meant sharpening her pen and her skills behind the board for full effect. The result has been a budding career that cues toward a promising young voice primed for excellence with vested cosigns from the likes of Benny The Butcher, 38 Speshm and purists the world over.

So, who is she? Taking a break from crafting her forthcoming The Lotus Child album, the Buffalo native made time to answer the question, speaking with The Source on her introduction to producing and her growth as a storyteller. In our conversation, Che opens up about finding her own lane in the current sea of femcees dominating Hip-Hop and the lessons learned along the way.

This interview has been edited for brevity and clarity.

You are an artist and a producer, but when did you start making beats?

So I started making beats when I was 15 years old. I was dating a guy in high school who was a producer at the time, and he gave me his Frooty Loops program, a copy of it. And when I got that program, I used to go in my mom’s attic every day after school, and sit in my mom’s attic and learn that program. So yeah, I made my first beat when I was 15.

When did you realize you had a talent for rapping?

I started realizing that this could be something for me when I started when I had got a shout-out from Benny in 2016. This is before Benny already had his Griselda deal. Me and him did a song together called “Tyson“. He was the first artist from upstate to shout me out and hear about me and work with me. Just seeing his reaction to me and even where he is now when he signed his deal. He’s always shouted me out in interviews like, “Yo she’s the hottest female spitter.” Then I got around Spesh and I was like, “Dang so this is possible.”

I really started to see my talent when I started working on the hunt, Spesh was doing the beats. I mean I always knew I had a sharp pen, but it improved on a different level with that product and that confidence when I listen back.

Rappers from the 90’s such as DMX, Foxy Brown, Jay-Z, Tupac, Biggie and many more had an influence on your show. How did these artists help you adapt to your craft?

Just like listening to them and learning how to how to rap, how to count bars. Because I remember when I first learned how to rap I didn’t know how to count bars. I used to just rap and rap where I would stop too soon. My friends used tell me like, “Keep going, that’s not a full 16.” I started listening to like certain rappers and I was like, “oh ok I can kind of feel when they were about to end now.”

So, you know just like little stuff like that. Like how to craft bars, how to build up to a punchline, that was something I learned from listening to Jadakiss. I learned how to build up to a punchline and not to just say. it. It’s just things like that and even like flows and the content base, like staying to one topic and not going off and talking about 20 different things in four bars. And there’s nothing wrong with that sometimes, but I just learned little things like that just from listening to rap from my favorite rappers.

In 2016, you were already making a name for yourself with your debut mixtape Poetic Thoughts, but your single to “Champion” on your project Thrill Of A Hunt pushed you to send that song to 38 Spesh, what was going through your mind after sending it to him?

I was friends with him on his personal Facebook at the time so I knew him. For a whole month my friend was telling me to send him some music. I was like, “Well I don’t have anything new so I’m going to wait until I get it back.” So, I sent it to him and he messaged me like three minutes later and was like, “Yo you’re amazing”.

He was like, “You have to come out to Rochester.” And so we talked on the phone for like 30 minutes and then he was just like telling me that he wanted me to come have a meeting with him the next day in Rochester. So me and my cousin, we drove out to Rochester, which is an hour away from where I live at. We drove out there and I had a meeting with him. He pretty much said I’m down with the team. After that first meeting he had a plan for me. He was working on a rap project and he had the song and everything ready for me.

What are some things you have learned while working with him?

He’s a fast worker and he taught me how to work faster. Not in a way where it’s like rushing, but like you have to write your rap in the studio and go in there and record it. You’re not gonna come back a week later and think you’re about to just keep doing it.

I learned how to write in the studio around him. I had never done that before. I was used to just writing at home and it would take me a few days, maybe a week to write stuff.

How does it feel being that you are the First Lady of Trust Gang? Do think as though you are the only woman on the team that you have to work twice as hard?

For sure, for sure! It felt great being the first lady, but definitely I have to work 20 times harder. I’ll give you an example. When I did the verse for “G Rap,” the first verse I wrote Spesh told me to rewrite it. He was like, “I’m going to be your biggest critic. If I don’t like it, I’m gonna tell you. I’m not letting up. I’m going to go crazy you know I’m bringing my best bars, you better bring yours or you’re going to get smoked on the track.”

Women in the rap game have to constantly fight against stereotypes and prejudice and at some point, you were told how to dress and what to rap about, how did you choose to remain true to yourself and authentic?

I had people in my ear initially telling me I had to be a certain way in order to get people to listen to my music. there’s room for artists like myself and artists that are in the “sex sells” lane. I’m all for it too, because I listen to those type of rappers, but my issue is that it’s overly perpetuated and it’s only what they show from women. So, I would say when rappers like myself can exist in the same aspect as those kind of rappers, I don’t think it will be that big of a deal. There has never been a space I can think of, where both of them can’t exist. I really have to thank the team and people I have around me because they fully support me.

As God Intended felt different from your previous project with 38 Spesh. You touched on multiple topics, but one that stuck out the most was “Daddy’s Girl”. You haven’t spoken about your relationship with your father publicly, but we can hear the pain in your lyrics. When you were recording this song, did you feel a sigh of relief to release every emotion you had inside after you finished the song?

Yeah. I remember I actually had one of those verses over a different beat, and I remember telling my friend and she was like, “I don’t think I ever recently heard a woman speak about something that a lot of people in our community go through, which are daddy issues.”

I listened to that song out of all of them on the album the most when I first got the mixed version of the album back. Every word just describes my life.

How would you describe your music-making process or the way it make you feel?

I mean production is key. I mean I’ve rapped over some really bad beats before. I would say if I have a good beat, it will definitely bring out everything. My creativity will be on another level. So production and I just speak. The beat can tell a story before my words do. So I would just say a beat and then the story I already hear before I put the lyrics on it.

On your latest project After 12, what message were you delivering on this project?

That women can be producers and artisst and dominate and take over the game and kill these men. Women can dominate in both lanes.

I definitely prefer producing way more. I love rapping, but producing is just way different. With rapping, sometimes I have to take more time off than producing. Sometimes I might have to take a week or something off in order to rap, because our minds are so powerful. Sometimes it’s hard with so many thoughts possessing you. I can be in a bad mood and make a beat, I can’t be in a bad mood and rap sometimes.

Who are some artists you would love to produce for if the opportunity was presented to you?

Definitely Rhapsody. I would love to produce for her. I want to produce a beat for Spesh. He’s only rapped on one of my beats. Nas, of course Nas. Those are the only people I can think of that I have at the top of my list.

Who do you make music for?

The post On The Rise: Buffalo’s Che Noir Is Taking Control of Her Own Story appeared first on The Source.