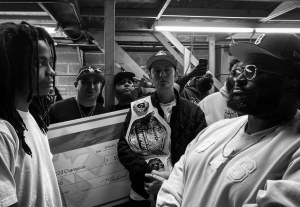 After bringing battle rap to the Twitch community with 2020’s Grand Prix, King of the Dot is poised to make history once again with the service. For the first time in the subculture’s history, the S1 seasonality format will introduce a more recognizable structure to the events, culminating in one winner taking home $100,000 USD and additional performance-based prizes. The 6-month season will air every week, organized by King of the Dot and streamed exclusively on Twitch, and will be entirely free for millions of fans around the world who help decide the winners with their votes and participation.

Beginning June 20th and every Sunday thereafter, top-ranked battle rappers across America will compete to elevate beyond their division into the sudden-death playoff rounds. Artists are able to use any creative language and performance elements they want, aside from physical contact*, to win over the voting audience. The standings at the end of each week will reflect each performer’s record, and the top-four competitors from each division move into the S1 playoffs, beginning in November.

Instead of the old East vs West rivalry from the 90’s hip-hop, the modern era has burgeoning scenes in every region. With an East, West, North, and South division, King of Dot’s regional talent managers have courted the top talent from New York, Los Angeles, Detroit, and Atlanta, respectively, to clash for the life-changing grand prize.

League founder and owner Travis “Organik” Fleetwood says of the S1 partnership, “After we saw how the Twitch community and Twitch team embraced battle rap in 2020, we didn’t even blink when we had the chance to make history with them in delivering S1. You learn more from people’s actions than you do from their words, and Twitch demonstrated that they are committed to creating the best experience for battle rap fans around the world every time the ball came their way. We look forward to bringing our audience onto the service for many more successful seasons.”

King of the Dot events mixes A-List celebrity guests and athletes with a dedicated audience who travel far and wide to participate in the spectacle. Artists like Ice T, Deadmau5, Method Man, and the OVO front-man Drake, who once knighted himself as KOTD’s #1 fa, have helped the league grow to become renowned as the worldwide leader in innovation for space.

The Canadian King of the Dot league has always been first-movers in the battle rap space with smaller leagues replicating their format for good reason. They were first to popularise winner-takes-all tournaments, the first to create the Pay-Per-View model that is now deployed globally, and the first to launch and license a number of the formats which ultimately define the culture today, including the introduction of seasonality.

“S1 seasonality is the only logical step for our league, artists, and partners. The regular cadence enables artists to make new fans every week, from every corner of the map, and puts them in a position to capitalize on their talent all year round. We’re filling Madison Square Garden twice with the number of viewers passing through these streams and our artists deserve even bigger audiences,” says Charles Morgan, owner of King of the Dot. The season will air live battles every Sunday, alongside an exciting slate of lifestyle content featuring artists from the league and around the world. The full programming schedule, covering sports, gaming, music, and culture, will be made available exclusively to viewers on Twitch.

The post King Of The Dot And Twitch Partner To Launch First Ever Battle Rap Season appeared first on The Source.