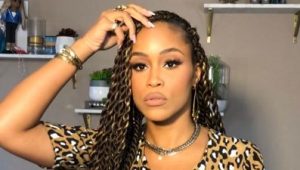 Eve is making her return to the small screen in the upcoming ABC drama called, Queens.

The show will follow a 90s girl group that reunited in their 40s. Eve will portray a 42-year-old mother of five who was known as Professor Sex in her prime. But she’s content with her domestic life and is torn between that or reuniting with the Nasty B*tches.

Eve will also write music for Queens and perform the song for her character.

This is a good look for the Hip Hop legend who previously announced her departure from The Talk in November. She told her co-hosts,

“This is one of the hardest decisions in the world because I wish I hated one of you, but I don’t. I have had the most beautiful experience. I’ve grown as a woman, as a person. I’ve said it once, I’ll say it again, I never thought that being on a talk show would be this much of an opening of my spirit, soul, personality, everything. Sitting on stage with all you women has been the best thing ever. I truly love you.”

Eve added that the ongoing COVID-19 lockdown makes it difficult to record from London and she wants to focus on expanding her family.

“We’re [England is] on another lockdown from Thursday, and that’s another reason, obviously staying home has been such a blessing because my husband and I got to know each other in a different way, a beautiful way. So I want to be closer to him. I want to concentrate on expanding our family, being with my family.”

Eve is no stranger to acting. She had her own sitcom named after her which aired for three seasons on UPN. The show was centered on a group of friends navigating their relationships with the opposite sex. The cast consisted of Jason George, Ali Landry, Natalie Desselle-Reid, Brian Hooks, and Sean Maguire,

Missy Elliott sung the theme song titled, “The Opposite Sex.” Listen to it below:

The post Eve Set to Star in Upcoming Drama, ‘Queens’ About a Retired Female Rap Group appeared first on The Source.