ATL Restaurateur William Platt, The B.A.N.K Foundation Team Up with The Georgia Department of... 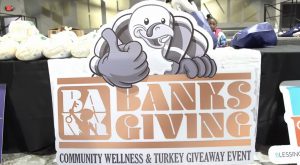 If it were up to top Atlanta Business executive and restaurateur, William Platt, no child or family would go without during the holidays.

Platt and his wife, Ericka are the owners of Restaurant Ten and Rosie’s Coffee Café franchise. Platt recently opened a luxurious event space on the Westside of Atlanta entitled, The Bank. Beyond being Atlanta’s power business couple, the Platts live by their motto, “impact over income.”

Therefore, the B.A.N.K is an acronym for “blessing all neighborhood kids.” During this holiday season, Platt ensure that all families on the West Side of Atlanta and the Metro ATL area have a deserving holiday.

Along with his business partner, Dae Shelton, their B.A.N.K foundation, the H.U.G.S foundation and the Georgia Department of Behavioral Health and Developmental Disabilities, they team up to launch a massive turkey/food giveaway, entitled, “Banksgiving.” Shelton’s brother, Darnell, is a board member and President of the H.U.G.S foundation.

Platt also pulled in his long-time friend, former NBA star, Charles Oakley to assist with preparing and handing out food.

“I’ve always been active in the community and I try and do what I can to support our people, especially during the holidays,” stated Oakley. “When Will (Platt) told me about the event, I wanted to jump on board and serve the community.”

Beyond just giving food away, The B.A.N.K foundation ensured attendees received health and wellness screenings from the Georgia Department of Health. Medical professionals were also on hand to help anyone in need of mental and behavioral services.

“This time of year has always been about family and community. With groceries being so high, we want to ensure that families don’t have to worry about food insecurity on Thanksgiving,” said Platt. “We were honored to serve our community this weekend at the Bank event center.”

The Platts along with a family friend, NBA star, Stephen Jackson were the support system for George Floyd’s daughter Gianna and her mother Roxy Washington.  They help to amplify Gianna and Roxy’s voices and worked to try and push the George Floyd legislation bill. The community has always come first for the Platt family.

The post ATL Restaurateur William Platt, The B.A.N.K Foundation Team Up with The Georgia Department of Health & Charles Oakley For Massive Thanksgiving Giveaway appeared first on The Source.